Wes Anderson is like a Lars Von Trier for the recreational filmgoer: he knows how to make artsy edginess palatable for the masses. Moonrise Kingdom follows Anderson’s usual storybook directing style. An Anderson film is always, colorful, character-ful, graphic and socially hip. That said, an Anderson film is also usually rich with story; the one place where Moonrise Kingdom is lacking.

The film is actually (I’d argue) the darkest of all Anderson’s work, and maybe that’s partly what continues to hold me through it even though it ultimately leaves me wanting more. Characters come and go like plastic chess pieces, only used to propel the narrative forward in most cases. While Anderson’s previous work only had this pretentious two-dimensional character problem in small doses, it should be noted that Moonrise Kingdom has this problem throughout – even the main characters are in many ways dimly lit. 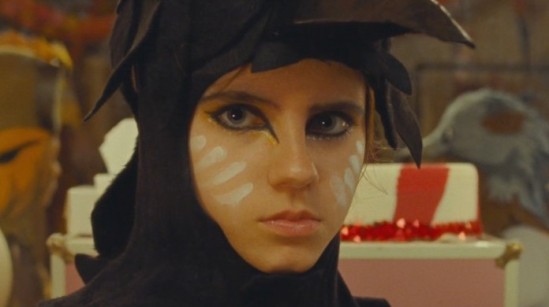 Similarly, but in direction opposition to Von Trier, Anderson leaves a lot up to the viewer in this film, with cardboard-like performances from the actors against detail-saturated set designs that make you feel like you’re watching a school play gone awry. Again, this is standard stuff for an Anderson film, but all of his previous work through in many ways nauseatingly flat, always also held deeply introspective stories that made it seem sort of like you were reading a book that came to life in front of you. Comparing Kingdom to, say, Von Trier’s Dogville, where the viewer is tasked with filling in the blanks of the chalk-outline set design yet given more character detail than they may want to handle, both of these directors seem to like working against their audiences, only in direct opposition of one another.

The beauty of an Anderson film is that his style is so utterly easily digestible by mainstream moviegoers, it’s going to be virtually impossible, I fear, to ever see him get a terrible review from someone. Von Trier, however, many times uses imagery and forthrightness in his cinema that the mainstream will more than likely be repelled by, despite how much the critical masses will tout his genius.

If we look behind the curtain, there’s two things really going on here: First of all, Kingdom is endearing because of its two main characters which are brainy, quirky, adolescents. They’re also oddly easy to misconstrue as fledgling hipsters. In fact, there’s no way you can watch this film and not think if these two kids hit 18 today they’d be dressed in skinny jeans with black framed boxy glasses and unkempt hair.

Second, it’s a love story between these two kids. One of those love stories that you stick with because it’s precious, simplistic, virtuous and yet there’s an element of danger to it.

That’s it – that’s where the film excels – on these two areas alone. It’s in its artsy vapidness that the audience can easily get lost and fall in line with the narrative, willing to follow it to the end, but I worry there’s nothing tangible to Anderson’s kind of cinema except the fleeting moments when a new character (played by a usually stellar character actor) pops up in a scene and you get to whisper to your viewing patron in the seat next to you, “Hey, isn’t that so-and-so?”