I find myself having to begin warming up to this whole remake/reboot market which Hollywood seems to be in lately, and with Fincher, an amazingly unique and original filmmaker, I have total confidence in the fact that he will put out a fine film, but deep down it’s still hard for me to handle the fact that he has to be getting sloppy seconds on this one. What I look forward to most about the first remade feature in the Swedish crime trilogy is that with Fincher’s eye, I am sure it will look gloriously dark and seem almost Ikea-perfect. However, the original Swedish films were damn near perfect, although they regrettably had the feeling of television miniseries more than cinematic experience. (For those of you living under a rock this year, I’m of course talking about Stieg Larsson’s The Millenium Series and, in particular, The Girl With The Dragon Tattoo.)

Anyway, I ran across this little promo spot which the filmmakers seem to have put together to promote the film in a most unique way – highlighting both the artistic, marketing and musical perfection which both David Fincher and his new-found scoring partner Trent Reznor constantly (and usually successfully) strive to. Check it out below.

There’s only so much you can do with a vampire movie before it lapses into familiar territory. Fortunately, this is not so much the case with the Swedish thriller Let The Right One In. Just off the bat, the thing that stands out the most about this film is its use of the rather obscure (or, at least, rarely referenced) vampire lore that they have to be invited into your home, if they come calling. It’s odd because other than Coppola’s Bram Stoker’s Dracula, I can’t think off hand of many vampire films that throw in this interesting catch. Coppola’s film, much to the dismay of many of my readers – I’m sure – was one of my favorite vampire films. Albeit, I was a kid when I saw it, and the stylistic interpretations of Stoker’s novel (which I had only just been exposed to through high school) were something that always stayed with me. One thing you can’t say was forgettable about that movie was the look, the feel and Gary Oldman’s haunted performance.

Soon thereafter, I was further enamored by the lady-magnetizing effects of Interview With The Vampire – having seen this multiple times at the theater was equal parts film appreciation and the pointless adolescent hunt for girls. Banderas, Slater, Pitt and Cruise made sure the aisles were stacked with girls who needed someone to, at turns, hold them when they were frightened and hold their popcorn when they were not. Blade stood out for a while if not only for its New Order-beat, sprinklers-of-blood-at-the-club opening scene. As I got older and craved more unique film-fare, it was the Pixelvision Nadja and Innocent Blood that I found to be my faves. The Hunger didn’t really stick with me until I saw it again in my twenties at which point I was confused as to how I had never appreciated it before that, especially given my love of Bauhaus. It occurred to me that it was likely due to the central themes of aging and the typical Scott-style overblownness which as a high schooler I found myself rebelling against.

So, I say all that, and take you on that journey, to say this: Let The Right One In is my new favorite vampire flick. 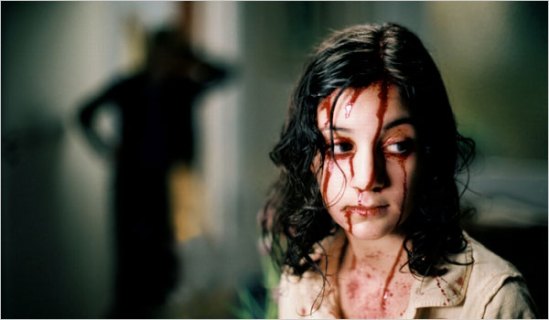 It’s a very predictable storyline, and a very slick production, so it seems almost antagonistic to any kind of art film, but I would even go so far as to say this is art-horror. The story is more about the life of the lead character, a little boy named Oskar who is 12 years old living outside Stockholm. He is constantly bullied at school for being introverted and book-smart and he lives with his mum in a towerblock with tiny, square windows that look into each apartment. Next door to him is a new resident who lives alone with his little girl Eli. Although, as she repeatedly reminds Oskar, she is not “a girl.”

Oskar quickly develops a friendship/romance with Eli, for a while never realizing her unusual behavior as something of a red flag. That’s what’s so great about him, he is pure innocence on one level, yet on another he identifies with the basest of emotions. Identifies is the key word here though, because Oskar himself is not prone to dark character traits. More like a psychiatrist-in-the-making, he is able to observe objectively from the outside of his emotions and still connect to relevant moral and social standards. This makes one hell of a complex 12-year old and one hell of dramatic character. You can never pre-suppose what Oskar will do or say, because unlike many 12-year old characters in the movies, he is at odds with himself.

The subtleties of Eli’s character as a vampire are also a nice touch to the film. As most vampire lore is now urbanly recognized, there are some traits we expect in her to be reflected. They are inherent  expectations in the audience member, basically. There’s no way you can watch a vampire movie and not think, well they can’t come out in the daytime – unless of course you’re watching one of those daywalking vampire movies. As noted above though, it’s less obvious lore such as the inability to enter a home uninvited that may sneak up on you. The film knows how to use these obscure traits to its advantage. For instance, sometimes we catch a glimpse of Eli as a withered old woman, thereby indicating her age (as she quips) is really “more or less” 12 years old.

The most attractive use of lore for me is again, what the whole film is sneakily built around, the fact that she can’t enter the home uninvited. What’s more, she reveals just what will happen if she was to enter uninvited – furthering the lore to detail for us that it’s not her inability, rather the pain which it will ultimately cause her if she does it – bleeding from every orifice and through the pores in her skin after she enters.

Eventually it becomes clear where the film is going, and the final scenes reaffirm what we expect to happen all along, so it’s nice that the film takes a unique approach at depicting the obvious. The film takes itself very seriously, and with a careful hand the director Tomas Alfredson crafts it perfectly. Every scene is exacted with a flawlessness that is beginning to be more prevalent in much European cinema, especially dramatic features. The film has been critically received very well and even received a number of awards, so I guess there’s no reason for me to run on and on about how great I think it is here on my lowly blog, but I will say that as vampires evolve in cinema (as I’m sure they will), I’ll be on the lookout for my next favorite – I have a couple of ideas brewing myself – something that will bump Let The Right One In right out of place.