The first film by Eric Rohmer that I ever saw was Presentation, or Charlotte and Her Steak from 1951 and I got a big kick out of it. I don’t know, maybe it’s because I’ve always liked the idea of a woman who would just fry up a steak for herself on a whim. Granted, the steak in question looked a little tough – maybe a bad cut – but it’s the principle, really. Other than that I’m not sure what drew me to the film or made me like it, I’ve thought about it for a while now, but then I figured it out when I watched Rohmer’s 1963 film featuring friend and producer (turned director) Barbet Schroeder, The Bakery Girl Of Monceau. (Interesting note: the voiceover for Schroeder’s part is actually done by another director you may have heard of, Bertrand Tavernier).

The women in these films are strong, opinionated, and not overtly attractive. I like that they aren’t afraid to do what they want and how they’re magnificently polar from any American cinema woman of the same time. These are not housewives to be, they’re not even steady girlfriends to be, yet they’re so engaging, honest, interesting and inviting that it’s no wonder men go out of their way to get their attention. 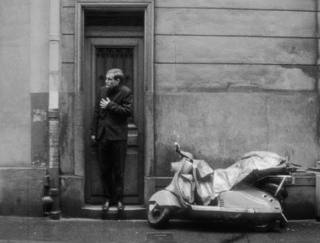 Schroeder, in Monceau, plays a law student who is woefully attracted to a dark-haired woman he passes on the street. Like any likable, self-respecting, sensitive male, (you never see those in movies anymore, right?) he can’t bring himself to talk to her. Instead, plans another “chance” encounter by frequenting the spot where he saw her that day. But the courage/opportunity still has not presented itself. In an effort to both give himself something to do and not looking completely like he’s stalking this woman, he ducks into a little bakery on the corner every day after his “chance” encounter.

It’s obvious how this triangle comes into focus, when the more opportunity he has to get to know someone, instead becomes the girl at the bakery counter – who may as well be an angel, she’s backlit so beautifully. Eventually, though he talks to the woman on the street, but then never sees her again. It’s during this time that his relationship with the bakery girl has every chance of survival, but as he says himself in his narration, he still longs for the girl he can’t have.

This concept of chance encounters that Rohmer puts into play in a number of his films, is something that excites me as a filmgoer. Stories with strangers are always ripe for intense and/or problematic situations to arise. At the end of the film, Schroeder has finally convinced the young girl at the bakery to go out on a date with him, she makes no promises, of course. Conveniently, the conflict occurs when on the night of his date, he runs into none other than the dark-haired stranger right outside the bakery.

Confessing that she’s been spying on him all the time that he’s been devouring the inventory at the store, because she lives in one of the apartments just across the street, seems almost to good to be true. It’s the great thing about Rohmer’s characters – she’s turned out to be just like him.